In the three kingdoms of Mytica, magic has long been forgotten. And while hard-won peace has reigned for centuries, a deadly unrest now simmers below the surface. As the rulers of each kingdom grapple for power, the lives of their subjects are brutally transformed, and four key players, royals and rebels alike, find their fates forever intertwined. Cleo, Jonas, Lucia, and Magnus are caught in a dizzying world of treacherous betrayals, shocking murders, secret alliances, and even unforeseen love. (Goodreads blurb)

There’s no denying that Falling Kingdoms is detailed in its non stop action and recounting of history. There’s blood, there’s rage, there’s passion and at times it’s overwhelming but at its core, Falling Kingdom contains all the elements of a typical fantasy book. Lack of magic, intra-kingdom fights, and definitely inter-kingdom wars.

Where this book loses me is in the incredulity of the events heaped on top of each other. There are quite a few horribly violent scenes and by the end, they don’t faze me as they should. To some people this is a good thing – a sign that the author doesn’t shy away from difficult topics – but to me it didn’t work. It’s like doing your finale as at the start of an act and everything after isn’t going to be as shocking. The book opens up with this murder where this ass of a character literally stabs someone else through throat… and then later, someone beheads his son b/c a political alliance is more important… Yeah, there are quite a couple of things that are over the top with extravagance, but really besides that I was quite intrigued by it. 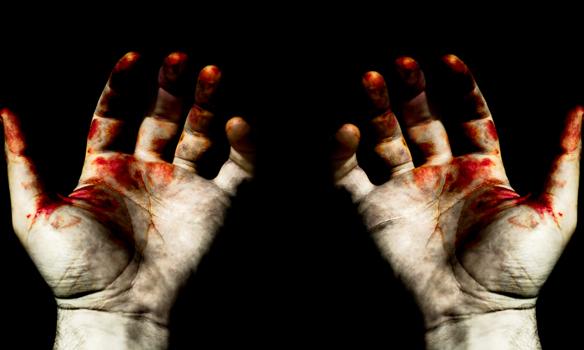 Falling Kingdoms is told through four different perspectives. Cleo, the princess of Auranos is getting engaged to a man she hates and spends her time trying to get out of that arrangement and also fix her consciousness after watching that same nobleman do the neck stabbing thing I mentioned earlier. She was horrid at first, the caricature of a vapid royal but by the end, she kind of grew on me if only because the hardships she faced actually turned her into a better person. However, I still thought she was way too into sisterly-love b/c she wouldn’t stop at anything to save her sister from death and then it gets anticlimactic near the end and yeah. I was just kinda confused at all that she did.

Jonas, the only non royal narrator is the brother of the man stabbed to death and all he wants is revenge. He needs to jump off a fucking cliff.

Seriously, extricate yourself from this book dude… He’s literally just this ball of anger and in the end, he doesn’t even get anything done. Useless and not additive to the plot at all.

Finally, Magnus and Lucia who are siblings and of the Limeros royal family. Magnus started out as my favorite and then it went down hill. He and Lucia have a thing going on and it’s totally scandalous until it’s not. Anyways, I just felt bad for Magnus the whole book (until the end of course). He has to deal with Lucia, his nasty violent father, his mother who doesn’t seem to care about anything, and his father’s mistress who literally tries to seduce him in the middle… talk about fucked up (and over the top, see paragraph two). And then he turns into a robot at the end because he’s heartbroken. Understandable but totally unnecessary. Lucia was the most steadily likeable of all the characters through the book. She has magic (ahhh yay) and is a prophecy child and apparently adopted (but the narrators don’t figure that out till the end). She’s supposed to be the one who can save the world from losing all magic and for one, she doesn’t act like a helpless princess.

The benefit of all these narrators is the perspective we get within all three kingdoms. Unfortunately, all three kind of seem the same. With all three royal narrators, I kept envisioning the same castle as the one in Throne of Glass because there wasn’t much description… But I did get a lot about the history of magic in this world and that was really interesting and saved this book’s rating. I’ll let you read the book and watch as things are revealed and motives become clear but the history really was the most interesting part of the book.

If you’re hesitant about reading this, do it for the story. It goes all over the place and is actually quite interesting so if you can ignore the flamboyance of the plot and the characters, all shall be good. I’ll try to read the next book if I have time, but school is starting so…